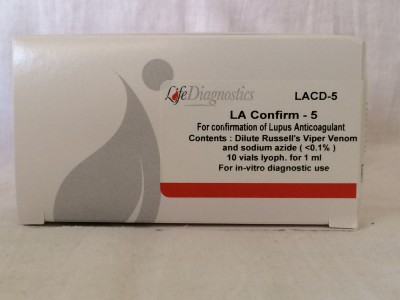 Refer to Friend Add to Favorite Add to Cart

Both LA-Screen and LA-Confirm are simplified Dilute Russell's Viper Venom Time Tests (DRVVT) used for the detection of Lupus Anticoagulants (LA) in one stage clotting tests. Both products are sold as lyophilized reagents and are available in both a small and large size format.

LAs are autoantibodies against negatively charged phospholipids or complexes of phospholipids with either beta-2-glycoprotein 1 or clotting factors such as prothrombin. They occur in various clinical conditions, especially autoimmune diseases and are now considered to be a significant risk factor in patients with otherwise unexplained thrombosis and are often present in women who have recurrent foetal loss. LA have traditionally been detected using phospholipid responsive clotting tests, such as the activated partial thromboplastin time (APTT), kaolin clotting time (KCT) and DRVVT where they have an anticoagulant effect. The DRVV time first became popular following the publication by Thiagarajan et al. in 1986. Gradipore/DSRV Inc has simplified and standardized this method. According to Petri et al, thrombosis in SLE patients is more closely linked with LA detectable by DRVVT than with anticardiolipin antibodies detected by enzyme linked immunosorbent assays (ELISA). This observation was recently extended by Galli and Bevers who showed that the LA subtype with most effect on DRVVT tests is beta-2-glycoprotein 1 dependent and different to the prothrombin-requiring LA subtype having more prolonging effect on KCT tests.